2010 has so far been year filled with travels.  I spent half of January in Toronto and Waterloo.  In February, Vancouver certainly didn’t feel like home as it welcomed the world for the Olympics.  In March, I traveled to Ottawa, Kingston, and Montreal for a conference, and then I spent another two weeks in Toronto on a separate trip. April brought my farthest adventure as I got a chance to travel to Zambia for one week plus a bonus week thanks to volcanic-delayed flights.  Now on to the next adventure…

Today I arrived in the United Kingdom, which will be my home until June 19th.  Unfortunately, without much sleep on the overnight flight, I landed in London quite exhausted.  It took me about two hours to finally get to my hotel for tonight, located in the very central Victoria area, near Buckingham Palace. The most challenging part was finding my way to the hotel from the tube station.  Without the convenience of GPS on my BlackBerry, all of a sudden, wayfinding has become much more difficult!

The hotel is located on an interesting street that basically has a single, five story building filled with hotels on either side of the road.  Each hotel  is an individual property, no more than fifteen meters wide and every doorstep is an independent hotel. The room was small but comfortable, and the fitness component of my stay included carrying my luggage up four flights of stairs! 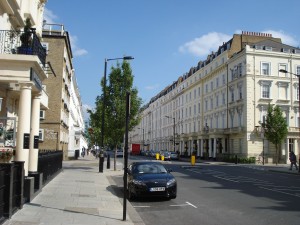 These buildings are actually split into more than ten individual hotels on either side of the street.

In the afternoon, I decided to go wandering around the city.  Headed in the direction of Westminster Abbey and the House of Parliament, several turns in a fairly quiet, residential neighbourhood, led me to a museum: the Tate Britain.  The Tate has an extensive collection of pre 20th century British Art and I had a great time going through their free collection.  After the museum, I walked alongside of the Thames until I reached the Parliament Building.  I wandered back to the hotel through a different path, and by that point, I was fairly exhausted after my three hour walk and from still being completely jet-lagged. 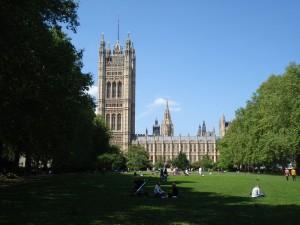 Palace of Westminster from the West

After a short nap, I walked around the neighbourhood of my hotel, which was filled with small cafes, restaurants, and probably more than 20 Pubs within five minute walking distance!  I ended up choosing a busy French restaurant that didn’t disappoint.  I started with a tomato, spinach, buffalo mozzarella and avocado salad, and the main course was a chicken breast with asparagus in a mushroom and cheese sauce. 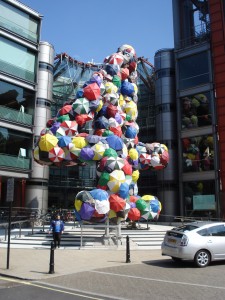 Giant art display outside of Channel 4 Headquarters. Those are all umbrellas!

I headed back to the hotel where I met Judy from Kenya, who was another Peter Cruddas Award recipient.  Judy seemed even more tired than I was from her travels!  I waited for the arrival of Rob Aronson, a friend of mine from Calgary, another recipient, but he ended up getting delayed an extra night in Paris.  As a result, instead of sharing my room here in London, he was only going to be arriving the following day in the morning.

Tomorrow is the first official day of the Peter Cruddas Social Innovation Award proceedings.  The remaining nine recipients will be arriving from all over the world and we will be meeting with Peter Cruddas in the afternoon.