I woke up before 5:30am, still jet-lagged from the eight-hour time difference.  I answered emails, had breakfast and spoke briefly with Judy from Kenya, who was staying in the room next to me.  Together, we walked a short fifteen minutes to the International Award Office where we relaxed for a couple of hours before lunch.  Rob arrived safely via train from Paris, and along with Judy, we sat in on a staff lunch workshop in engaging youth in programming.  The workshop was being led by Marieke Meelen, a young Award organizer from the Netherlands.  Unfortunately, we weren’t able to finish the workshop as the recipients were whisked away for our meeting with Peter Cruddas!

Originally, we weren’t expecting to meet with Peter Cruddas, a billionaire London entrepreneur, and the Global Benefactor for the International Award Program, and the namesake of our award. However, due to some changes in his schedule, he will now be able to attend our certificate ceremony at Buckingham Palace on Monday.  Fortunately, before Monday’s event, Rob, Judy, and I were lucky enough to be chosen for an intimate meeting with Peter at his company’s London offices. Alongside the head of his foundation, Stephen Cox, Peter spent more than an hour meeting with us!

After a few photos taken by a professional photographer, we sat around the boardroom at Peter’s company, CMC Markets.  Peter’s success story is a very interesting one.  Peter grew up in a difficult environment – his father was a “binge drinker who drank 25 beers and a bottle of rum each day” who had suffered trauma after his experiences in WWII.  At 15, Peter was the top student and athlete in his class, however, needing to support his family, his mother asked him to drop out of school to get a job.  To this point, Peter has never had a formal education of any sort. 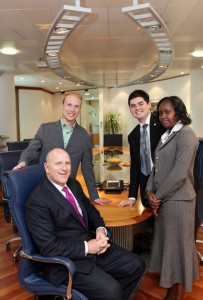 Peter’s first job was with Western Union, a company which at that point were the world leaders in sending telegrams.  Peter developed a valuable skill of typing out these telegrams. Later, he would end up working at trading companies where they used Telex machines to send orders around the world.  Peter got the job working at the company despite his lack of education due to his skill in typing on the Telex. Peter spent the next fifteen years working for the banks until the age of 35, when armed with 10,000 pounds of his own funds, he launched his own company, CMC Markets.

The big turning point was in 1994 when Peter first heard about the internet.  “Within two hours of hearing about it, I simply got it”, he told us in the meeting. Peter sensed how the internet would change our lives in every way, including his business, financial trading.  Over the next two years, Peter invested all of his company’s resources into building new technology that had never been developed before.  Finally, in 1996, Peter’s company had one of the first versions of corporate email in the world, as well as the first true financial trading software.

Since then, Peter has been able to grow the business and continue leveraging technology to be a leader in his field.  Unlike most other companies, there are no external shareholders or investors in the company, with the exception of a 10% stake that he sold to Goldman Sachs in 2007 for a cool 140 million pounds.  In 2006, Peter launched his foundation, which is entirely funded by himself personally. 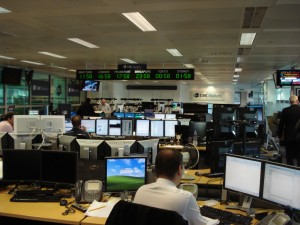 Here are some of the things that he commented on during our meeting:

– The thing that really made him stand out was how prepared he was and how hard he worked.  When he first worked at the banks, most of the other young men would arrive on Monday morning tired from the previous weekend, but Peter was always prepared to work hard
– He believes that his difficult upbringing was a big advantage for his success. Without safety nets provided by his family, he knew that there was no one else that he could rely on, and that ultimately made him work even harder.
– Peter spoke about the fact that entrepreneurs have so many ideas and they are often all over the place in trying to execute them. For him, his life only has three components: family, business, and the foundation, and he believes that being so focused on just a number of things has contributed greatly to his success.
– Peter’s self-claimed “best business advice” was: “I’ve made more business contacts through charity than I have made through business”.  While that doesn’t sound like a very altruistic reason for being involved with charity, Peter doesn’t shy away from the value that it has brought to his life.
– On being able to have managing control of his business, Peter commented that he was fortunate in that the early growth was not capital intensive, and as a result, did not require outside funding.  After that point, there were always enough profits to fuel future growth.
– I asked Peter about being able to keep up with innovation after he had the first mover advantage in his industry.  Peter said that they have maintained hiring an enormous amount of technical talent and every three years or so, they re-create their technology from scratch to keep up with the latest innovation.

After speaking to Peter for more than an hour, he politely left our meeting, and Steven proceeded to give us a tour of the offices at CMS.  As expected, most of the employees were in technology roles scattered throughout the building’s floors.  Of note, there was a large training room in which several employees were taking part in a workshop.  Peter also emphasized that there were vast investments into employee training and development.  When the tour was finished, we went outside the front door where one of Peter’s cars was parked: a stretch Rolls-Royce Phantom! 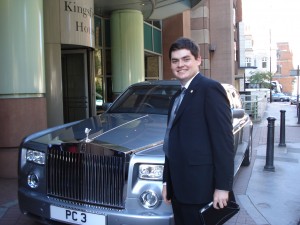 We returned back to the Award office by tube and then travelled 90 minutes by taxi to Windsor, where we would be staying until the end of the weekend.  For Thursday night, we stayed at the Savill Court Hotel – an extremely luxurious 19th century mansion that has been converted into a hotel.  In the lobby, we met all of the other delegates (click here to read about all of them), Anna and Rahul (two young interns who had organized the initiative) and Charlie Murphy, an American Ashoka Fellow who was going to be facilitating our workshops over the weekend.

Dinner was at an upscale restaurant not far from the hotel where we were able to gather for the first time as a group and start getting familiar with each other.  After a delicious meal of lamb shank followed by chocolate pudding, we returned back to the Savill Court and I promptly fell asleep after some late conversation with my roommate Jones from Ghana.