“Being good in business is the most fascinating kind of art.” – Andy Warhol, 1975

On Sunday, I had a rare day off to relax by myself in Ottawa, our lovely nation’s capital before an evening flight back home to Vancouver. I decided to spend a couple of hours to tour a highly-recommended exhibition at the National Gallery of Canada titled Pop Life: Art in the Material World. What I was expecting was a modern exhibit focused on Andy Warhol and his contemporaries. What I wasn’t expecting was some lessons on business and entrepreneurship, but that’s exactly what I got. 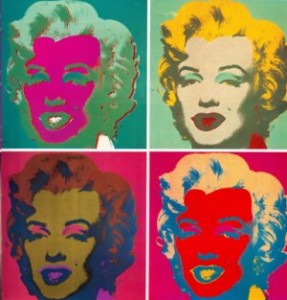 The exhibit featured more than 250 items from Warhol and many other artists who I wasn’t previously familiar with such as Jeff Koons, Damien Hirst, Keith Harings, Takashi Murakami and many more. More than just a collection of art, the exhibition was actually an analysis on the commercialization of art over the last thirty five years. In fact, it spoke to the disruption of the art world that this group of artists has created since the 1970s.

Warhol, famous for his depictions of commercial objects (Campbell Soup Cans), was deeply focused on becoming one of a few artists to actually profit from his art. He charged wealthy patrons large amounts of money to be painted in the same motif as his famous paintings of Marilyn Monroe or Elvis Presley. Warhol focused blatantly on publicity and media, and even launched his own magazine, Interview, which still exists to this day. His work in pampering the rich and famous drew criticism from art lovers and gallery owners, but certainly brought him financial gains.

One part of the collection talked about the group known as the YBA (Young British Artists). For example, Tracey Emin and Sarah Lucas, two YBA members opened up a shop with their hand-made designs on t-shirts, buttons, and mugs. With the idea of commercializing art a new concept twenty years ago; they were even able to bring innovation to their pricing. Their model: the first t-shirt with a certain design would sell for $10. The next person to buy one would be charged $15, $20, and so forth.

Damian Hirst, one of leaders of the YBC movement, was able to auction off a lot of 233 pieces of his artwork for £111,576,800 – the most ever at that time for a single artist. Ironically enough, it occurred on the eve of the September 2008 global market crash. Similarly to Warhol, Damian stated, “art is about life and the art world is about money.”

Takashi Murakami’s collection talked about how he had been able to license his work onto expensive limited-edition Prada bags and Louis Vuitton shoes that were doing millions in annual sales. Jeff Koons built a brand (and a commodity) around himself, going as far as developing a graphic collection of photographs and billboards depicting him and his wife in dirty acts that got plenty of attention.

I’ve grown up in a world where art has always been commercialized. This exhibit made me realize that even thirty years ago, this was not the case. Warhol and others were the driving force behind the disruption of art and through that, I have gained a new layer of respect for these artists as entrepreneurs. I didn’t expect to learn about business from visiting the art gallery, but more than anything else it makes me wonder what other facets of our society are ready to be similarly disrupted.